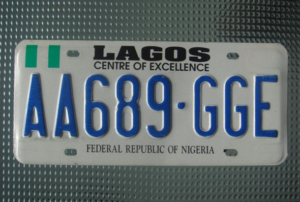 The Federal Road Safety Corps (FRSC) in collaboration with the Joint Tax Board will from today, January 1, 2020 force motorists with the old number plates to acquire the new ones even if the old ones are still ok.

It would be recalled that in 2014, Justice James Tsoho of a Federal High Court sitting in Lagos ruled that the FRSC cannot impose new number plates on motorists.
The ruling was sequel to a suit filed by Emmanuel Ofoegbu in September 2013, challenging the powers of the FRSC to issue new number plates.

According to a statement made available by FRSC’s spokesman, Bisi Kazeem, “the joint Tax Board agreed that with effect from January 1st, 2020, papers of vehicles with old number plates will not be renewed unless they upgrade to the new number plate so as to have their information captured in the NVIS database.

“Aggressive Awareness/ publicity campaigns in various languages will commence with immediate effect so as to acquaint the motoring public with this development before the 1st January, 2020 old number plate enforcement date.”

Though the FRSC says the reason for this decision is not strictly for revenue generation, but for safety purposes, stakeholders have criticized the move, arguing that motorists whose number plates are still readable, should not be forced to migrate.

Stakeholders have also observed that no aggressive awareness/publicity was done by the FRSC in various languages as earlier promised.

They called on the FRSC to suspend the plan of forcing motorists to acquire new number plates, as according to them, it is double taxation., that will cause unnecessary hardship on them.

Use alternative routes to avoid traffic at Lagos-Ibadan Expressway- FRSC